The “For” is defended by Minnu

Feminism is held up as one of the most successful social movements of the 20th century. Feminism is about changing the way the world perceives the strength of a woman. Feminism at its core is about equality between genders. Women aren’t superior to man nor the same but they are equal. It is about fairness, understanding and remembering that we’re all in this together. True equality leaves no one behind.

Many people offer up the argument that women are not the same as men, so there can’t be equality. Because men and women have different physical capabilities, these physical differences mean equality is not possible. The issue here is about equal rights and equal access to opportunities. Men and women don’t have to be the “same” in physicality to have the right to equality.

Being a feminist simply means believing in equal rights for all genders.

It’s not about hating men and it’s obviously not about women being better than men. When women sought to question inequalities in their own lives, they turned to history to understand the roots of their oppression and to see what they could learn from challenges that had been made in the past. People began talking about feminism as a series of waves to describe feminism at different points in history.

The first wave of feminism is usually assumed to have begun in the early 20th century (1900 to 1959) focusing on women’s suffrage, property rights, and political candidacy.

Second wave feminism in the 1970s was a little broader. It was about reducing inequalities in sex, family, the workplace, reproductive rights, and education.

Third wave feminism began in the early 1990s, focusing on embracing individualism and diversity. Third wave feminists are much more diverse than the main feminist movements of decades past, so we have many different issues that are important to us, and that is the most important difference. The fourth wave of feminism began around 2012 and has come full circle and embrace an even greater and more expansive interpretation of human rights.

Women have been strong since the point of inception however only until recently has society started to understand the true strength of this gender. Today’s feminist movement is more diverse than ever before. Feminism has become more attentive to the wider range of experiences of those oppressed by gender norms and stereotypes, including men. Women are expected to give birth, cook, clean, take care of the children, and earn a living. Regardless of any data and any statistics, we still go to work, take care of our families, clean our homes and continue to fight for equality because we are strong.

Feminism advocates for equal social, political and economic rights for men and women. I can call myself a feminist and a Muslim because this is exactly what was revealed in the Qu’ran 1500 years ago. In the end, we all must honor the beliefs, values, and ideas that feel right and good to us, women.

Why I Don't Support Western Feminism

The “Against” is defended by Nahlah

Feminism in the west has been a trigger-happy buzzword since the early 1900s. No one can deny the strides the feminist movement has made for women but at the same time, no one can deny the controversy that it has sparked as well. I was asked to write this article in opposition to feminism. This is a hard stance to take because of all the many wonderful things feminism has contributed towards women and humanity in general. But like most powerful and pioneering movements, there is a dark side to feminism.

One that can’t quite be overlooked if we are to move forward. And it is for this very reason that I have found myself moving farther and farther away from the feminist label, at least by the definition of what it is today. This isn’t the feminism that has fought for every woman;

this is the feminism that has discriminated against minorities, silenced women of color, and prioritized sexualizing ourselves overvaluing character.

From the start, western feminism was an exclusive club. In order to join, you not only had to be pro-women but also pro-white. In the early days, relations between feminists and the African American community (who were also seeking equality and the vote) were fairly cordial. The two groups were able to coexist peacefully with no interference or sabotage of the other’s goals. As the achievement of the vote grew closer, something changed. Elizabeth Cady Stanton and Susan B. Anthony, the afamed leaders of feminism in the United States, realized that to support the vote for people of color would undoubtedly harm the chances of their own kind: white women. To them, railing against the plight of someone else would assuredly ensure the success of their own.

“I will cut off this right arm of mine before I will ever work or demand the ballot for the Negro and not the woman.” (Susan B. Anthony)

“The representative women of the nation have done their uttermost for the last 30 years to secure freedom for the Negro…but now, as the celestial gate to civil rights is slowly moving on its hinges, it becomes a serious question whether we had better stand aside and see ‘Sambo’ walk into the kingdom first…Why should the African prove more just and generous than his Saxon compeers?” (Elizabeth Cady Stanton) 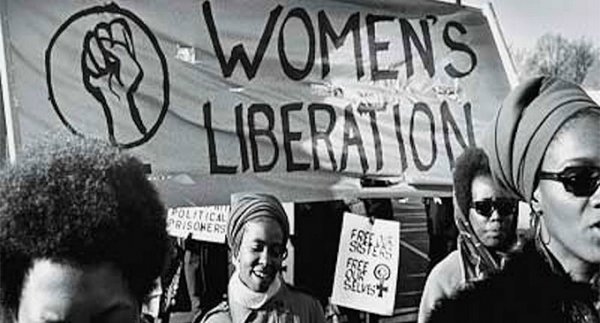 What is left of feminism in America today has become overshadowed by a gross negligence of real-world issues and a standard of oversexualization. Western feminism doesn’t care about uplifting women of color as we see the words of white women glorified and listened to while black women are questioned; Hispanic, Asian, and African-American style is labelled ghetto unless copied by white women, and the plights of women living in oppressive environments all around the world are ignored. Western feminism celebrates women who parade down the street topless in front of children but condemns women who dare to flaunt their “oppression” by wearing hijab to work. Why is it that when previous First Lady Michelle Obama strives for reform and true empowerment for women while embodying impeccable character and grace, she is shot down again and again; while the current First Lady who is rooted in corruption, prostitution, and disgrace and contributed little to her country is lifted up is the pinnacle of morality?

Yes, feminism has done much for women in regards to securing the vote, allowing us to work, and giving us a choice in what to do with our bodies. But it has not handed these things over so easily to women of colour and different faiths. And looking at the state of it today, I’m not so sure we want it anymore. Why champion for a cause that has not given 100% to champion for us? You don’t have to claim feminism to be for all women, all races, all classes, and all people. But when you claim feminism, you are also claiming those sides of it that are not so pretty. Can you justify that?

For more in-depth and insightful articles on the topic check out the links below:

The Difference Between Feminists & Womanists

Why Women in Iran Are Removing Their Hijab?

Are we all Social Individuals?

When Perfectionism Becomes a Problem